Insulin glargine is a synthetic insulin analogue that is very long-acting in human patients. The aim of this study was to compare the effectiveness of glargine, PZI and Lente insulins in newly diagnosed diabetic cats.

At diagnosis, there was no statistical difference between treatment groups for age, body weight, body condition score, or concentrations of fructosamine, blood glucose, B-hydroxybutyrate or bicarbonate. Four of eight cats in each group were Burmese.

In conclusion, glargine was safe to use and resulted in higher remission rates than Lente or PZI insulins in newly diagnosed diabetic cats. It is postulated that improved glycemic control with glargine resulted in better reversal of B-cell glucose toxicity and higher diabetic remission rates.
Omhoog

Disclaimer
The Journal of Feline Medicine and Surgery is an international journal and authors may discuss products and formulations that are not available or licensed in the individual reader's own country.
Furthermore, drugs may be mentioned that are licensed for human use, and not for veterinary use. Readers need to bear this in mind and be aware of the prescribing laws pertaining to their own country. Likewise, in relation to advertising material, it is the responsibility of the reader to check that the product is authorised for use in their own country. The authors, editors, owners and publishers do not accept any responsibility for any loss or damage arising from actions or decisions based on information contained in this publication; ultimate responsibility for the treatment of animals and interpretation of published materials lies with the veterinary practitioner. The opinions expressed are
those of the authors and the inclusion in this publication of material relating to a particular product, method or technique does not amount to an endorsement of its value or quality, or the claims made by its manufacturer.

Diabetes mellitus occurs with moderate frequency in cats and requires effective treatment
to avoid life-threatening complications. Dietary management4 can improve outcomes in diabetic
cats, but insulin therapy remains the most effective and reliable means of achieving glycaemic control.
The ideal insulin preparation for diabetic cats has not been identified.Many of the currently usedinsulins such asNeutral ProtamineHagedorn (NPHor isophane insulin) and lente fail to achieve good glycaemic control in cats for two reasons. Firstly, they have a relatively short duration of action, such that, when administered twice daily, marked hyperglycaemia (>18 mmol/l) occurs for several hours prior to the subsequent insulin injection. Secondly, the potency of insulins such as lente and NPH may induce counter-regulatory mechanisms in response to rapidly falling blood glucose concentration. Lente insulin is the most commonly used insulin that is registered for veterinary use in Australia, theUnited Kingdom and many other parts of Europe. Protamine zinc insulin (PZI) is the longest-acting insulin available for veterinary use.
Glargine has a very long duration of action in humans and healthy cats. In healthy cats, glargine has
a similar duration of action to PZI and longer duration of action than lente insulin. A study in diabetic cats reported that glargine administered once daily provided effective control and achieved similar efficacy to lente administered twice daily. Despite glargines long duration of action, it is unclear whether glargine will achieve more effective glycaemic control and improved outcomes in diabetic cats compared with lente or PZI.
Many diabetic cats treated with insulin are able to maintain normoglycaemia without exogenous insulin within weeks to months of beginning therapy. This is commonly called diabetic remission and implies remission from requiring insulin therapy rather than true remission of their diabetes.
The aim of this study was to compare glycaemic control and remission probabilities in newly diagnosed diabetic cats treated with either glargine, PZI or lente insulin.

Results
Twenty-nine cats were enrolled in the study and five of these were subsequently excluded by day 10 because of failure to eat the diet (two cats in both the glargine and lente groups and one cat in the PZI
group). Three groups, each consisting of eight cats, completed the study (n = 24).
Mean age was 12 years and just over half the cats were purebred (12 were Burmese); four in each treatment group; (Table 3). At diagnosis all cats were markedly hyperglycaemic (mean 26 mmol/l), and
had elevated serum fructosamine concentrations (mean 565 mmol/l) (Table 3). One cat in each of the
lente and PZI groups had received corticosteroids in the 6 months prior to diagnosis (n = 1, oral prednisone for 3 weeks just prior to diagnosis and intermittently for several years for inflammatory bowel disease; n = 1, long-acting depo injection 5 weeks prior to diagnosis for flea allergy/military dermatitis). (Table 3). Four cats (lente = 3 and PZI = 1) had urine culture and sensitivity testing performed due to an active urine sediment, but only one cat (lente = 1) had a positive culture (Enterococcus species). A minority of cats (12%) were diagnosed with complicated diabetes mellitus
(lente = 2 and PZI = 1) and were treated with intensive fluid therapy and intravenous regular insulin
administration (Table 3).
Glargine was associated with significantly lower mean 12 h blood glucose concentrations than lente and PZI, but daily water intake in glargine-treated cats was not different in the first 28 days of therapy (after which reduced group size made comparisons difficult; Table 4). Fructosamine concentration was significantly lower in glargine-treated cats fromday 56 (Table 5).During the trial, two cats treated with lente insulin and one cat treated with PZI had severe clinical hypoglycaemia requiring intravenous glucose therapy.None of the glargine- treated cats exhibited signs of hypoglycaemia, although
many had biochemical hypoglycaemia (blood glucose <3 mmol/l without clinical signs).
There was no significant effect of insulin type (P= 0.545) on change in body weight from initial hospital
discharge to trial end. During the trial period, cats in the lente and PZI groups lost a small amount of weight (mean change_ SD 68_ 34 g and 144_ 42 g, respectively) while cats in the glargine group gained a small amount of weight (mean change_ SD 81_ 46 g).
From day 28 onwards, many cats achieved remission. By day 42, only 2/8 cats in the glargine group
were receiving insulin while 6/8 cats in the lente group and 5/8 cats in the PZI group still required insulin therapy (Table 4). By day 112, all eight cats in the glargine group had achieved remission while 2/8 cats in the lente group and 3/8 cats in the PZI group had achieved remission (Table 4). There was a significant effect of insulin type (P = 0.014) on probability of remission (Table 6, Fig 1). 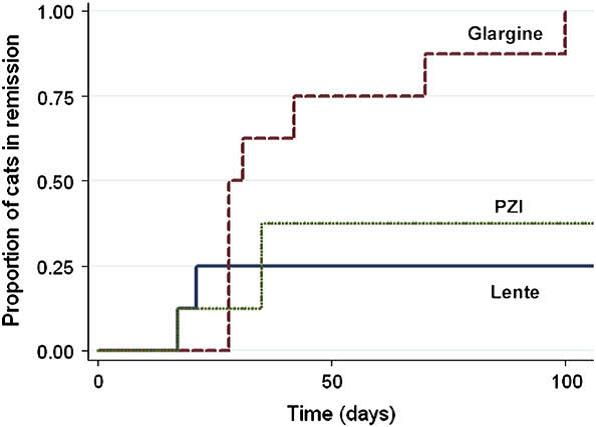 Acknowledgements
The authors gratefully acknowledge the Australian Companion Animal Health Foundation for funding
of this study, Idexx Pharmaceuticals for supply of PZI insulin, Nestle´ Purina Petcare for supply of cat
food for the trial, and all the veterinary technicians from The University of Queensland Veterinary
School.